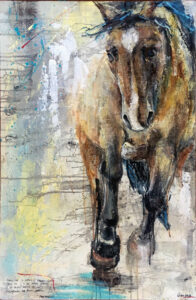 Born in Ukraine in 1981, Anna developed her unique brand of art through her schooling at the Academy of Arts in Odessa, Ukraine and the Academy of Realist Art in Toronto, Canada. Via San Diego, Florence, and Vancouver, Anna eventually made her way to Austin, where she now lives and creates.

Anna Ganina has drawn inspiration for her works of art from broad travels and her abundant life experiences as both a visitor and resident of many countries around the world. Through her paintings Anna goes beyond the obvious to uncover the symbolism within the human aspect of daily life. Her creativity and style come alive through her choices of imagery and materials. As a viewer of Anna’s images, one is transported to a world of fictional reality that exists in the recesses of the artist’s mind. Through her artwork, Anna challenges the observer to not only understand the scope of the actual image, but also submit to the feelings that the image provokes.

Anna is currently working on a new series called Renaissance. In this series her goal is to emphasize the beauty and importance of objects that were once great technological inventions and irreplaceable in our lives, but have become mostly forgotten. Nevertheless many of us attach strong sentimental value to them.

Objects such as a typewriter, movie projector, camera, and gramophone are depicted in her paintings in a traditional realistic portrait style, set in a contemporary vibrant abstract background. The traditional realism emphasizes the origins of the vintage objects and the contemporary abstract background is a link to our modern day society. Similarly the combination of cool and warm color palettes for the depicted objects and backgrounds reinforces the visual contrast between the objects and the settings.

By creating a strong contrast in her color palette and by combining two very different artistic styles in each painting, these vintage objects are cast in a new light, creating a dialog with the viewer.