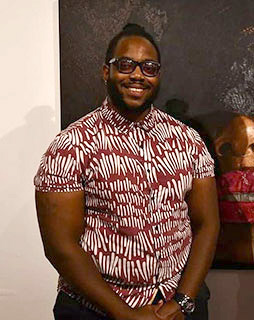 Dominic R. Clay was born in Fort Worth, Texas on August 26, 1985. He was raised in the beautiful rural community of Karnack, Texas where he discovered his passion for art at an early age. After attending Texas College in Tyler, Texas, he came to Houston to pursue a career as an artist and as a means of self-healing and balance. It was here that he received his B.A.F.A. from the University of Houston-Downtown.

Clay has curated exhibitions at renowned museums such as The Le Musée in New Orleans and has also assisted in curations for the Museum of Fine Arts-Houston’s City Wide African Art Exhibition. Clay has had the privilege of curating for the Bombay Sapphire Artisan Series-Houston (2014-2015), Danny Simmons’ BADASS ARTMAN (2017), Africa on My Mind (2017), The Magnificent Faith Ringgold (2017), Over There Some Place (2018) and numerous Bert Long Jr. Gallery exhibitions from 2015 to 2020 at the Houston Museum of African American Culture.

His passion for art has also steered him in the realm of academia. He has been invited to lecture at numerous events and venues, ranging from Right of Passage programs to Black History Month programs. Needless to say, the City of Houston has made Clay an artist with a purpose.