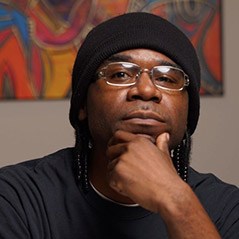 Growing up on the southwest side of Houston in an area called Alief there weren’t a lot of positive options but creating art allowed Craig to escape his surroundings.

Watching hip-hop movies such as Beat Street really inspired him to pick up the pencil and start drawing. It was something about the use of colors and shapes that the graffiti writer named “RAMO” used really intrigued him as a young kid. Over time with a lot of practice, trial and error Craig perfected his “style”.

He specialized in creating paintings and murals for people to enjoy.

A lot of his concepts and inspiration comes from showing African American culture in a positive manner. Representation matters by showing young black kids and teenagers they too can become artists and creatives.

His artwork has also been seen on Indio Beer Company’s “Do Your Thing” billboard ad campaign throughout the US and Mexico. NFL Super Bowl Committee (Super Bowl Houston LI, 2017). Direct Energy and Whole Foods Market.